Gustavo Piñero has become the AeroTech dealer for Latin America and operates from his home in Xalapa, Veracruz, Mexico. He has also become an avid rocketry hobbyist and held a launch in October 2001 just outside of Xalapa. ("Xalapa" sounds familiar because it's where jalapeños come from and is also spelled "Jalapa.") 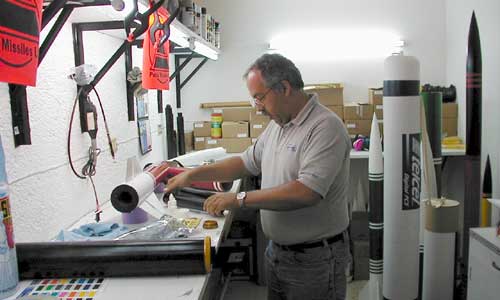 Above you can see Gustavo in his hobby room preparing motors for the launch. Gustavo and I have corresponded during the time he's been involved in rocketry and I decided to come down for a vacation (to a part of Mexico I'd never been) and a launch. My father (also John, but with the middle name Díaz while mine is Ludwig) came with me so we also had a good time together. Aside from the launch itself, we spent a very enjoyable weekend with Gustavo and his family. Xalapa is a beautiful area, very fertile and lush, but in the mountains so it's not too hot or too humid.

We arrived late Friday evening (October 26) at Veracruz City and Gustavo came to pick us up. This was the first time we had met in person and we had a meal together and then went to the hotel. (The food was excellent and most social activities seem to revolve around meals. A very civilized way to live!)

On Saturday we toured the Xalapa area and just relaxed. One of the places we went was the beautiful Texolo waterfalls. (This beautiful and spectacular area was where parts of the movie "Romancing the Stone" were filmed.) 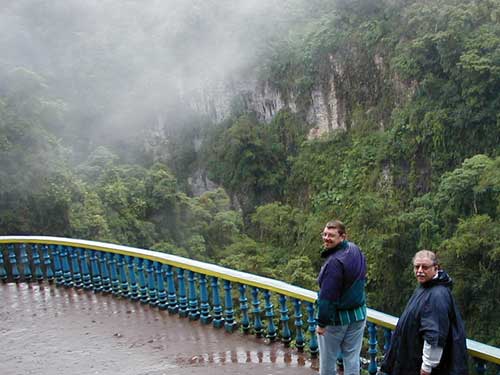 Above you can see my Father and I standing in front of the gorge into which several waterfalls pour. The weather was cool with a light rain, making everything very beautiful and atmospheric. (Photo by Gustavo.)

On Saturday evening, we helped Gustavo prep his rockets for the launch on Sunday.

In the picture above, you can see fellow rocketeer Armando, Gustavo's younger daughter Yuriko (who is very much into rocketry) and me test fitting the recovery system into Gustavo's P.M.L. Patriot. This would be the first flight of this rocket (on an M1419), and probably the first flight of an AeroTech M motor in Mexico! (Photo by Gustavo)

Gustavo and his friends own a small piece of land outside of Xalapa where they launch rockets and fly R/C airplanes and helicopters. In the photo above, you can see the road leading out to the field and how lush and green the countryside is. The grass you see on the road grew up in just two weeks. 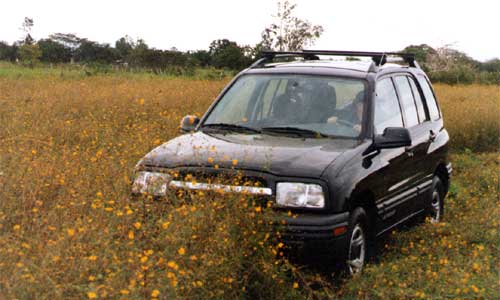 In fact, the weeds were so high on the field that Armando had to drive his SUV around in a spiral to flatten them down so that we had an area to launch! (Photo John Díaz Coker, my Father) The soil is dark and rich looking and seems to grow pretty much anything well.

I hadn't brought any rockets because I was worried about trying to take rocketry stuff on an airplane (remember this was October 2001). Gustavo has lots of rockets and was planning to launch his "Telcel" rocket (sponsored by the Mexican cellular phone company) and his P.M.L. Patriot. In the picture above, you can see the Patriot and some smaller rockets in the field. (Photo by John Díaz) 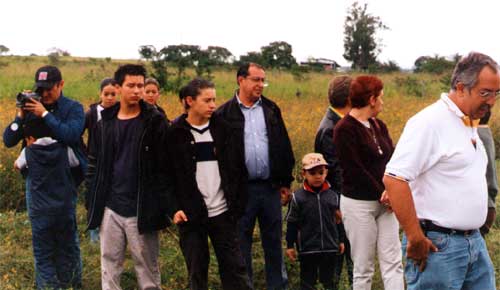 Many of Gustavo's family and friends came to watch the launch. In the picture above (also by John Díaz) you can see some of them. 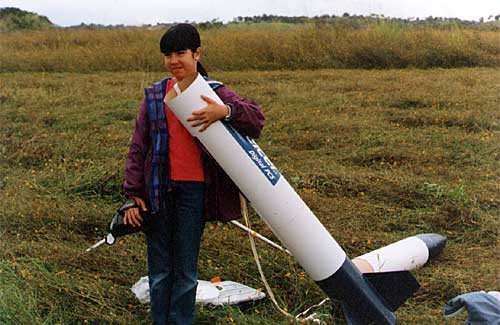 Gustavo's daughter Yuriko is his "rocket girl" and enjoys helping Gustavo fly his rockets and also has her own rockets. In the picture above (by John Díaz) you can see her patiently holding the Telcel rocket in preparation for the first flight of the day. 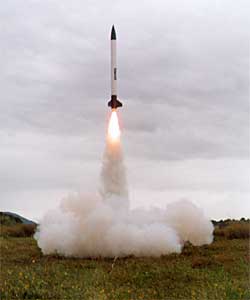 On the left you can see the Telcel rocket lifting off on a K550 (photo by John Díaz). This rocket is quite large (based on a Loc/Precision Bruiser-EXP) and is designed to eject special light and soft disk tokens at apogee. These disks will have printing on them which advertises Telcel service and includes a coupon for switching.

The company Telcel will pay for a series of these rockets to be flown as a publicity stunt and to distribute these tokens.

This flight was the second test flight and the tokens were blank Styrofoam disks to simulate the printed tokens which would be distributed in the actual flights. The flight went just as planned with ejection at apogee and a good spread of the Styrofoam disks. Recovery would prove a little more challenging.

The Telcel rocket uses apogee-only recovery. While there was almost no wind on the ground, there was a wind from the North higher up. This blew the rocket out from the field and into a canyon. The canyon is filled with trees and undergrowth, almost a jungle. Gustavo took right off and headed down into the canyon to get the rocket. 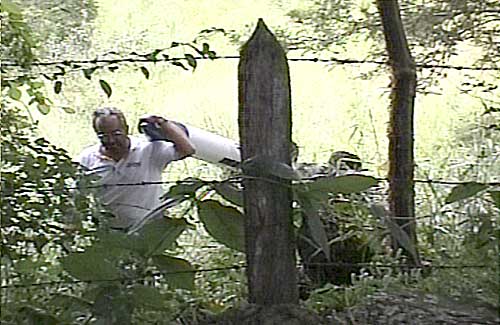 The top photo above was taken with a video camera, at extreme zoom. Gustavo is on the other side of a canyon, about a quarter mile away. And as you can see in the photo above, he carried the Telcel rocket all the way back.

Next up was the Beautiful P.M.L. Patriot. Gustavo had finished this with vinyl adhesive film, which makes a beautiful and shiny surface. This rocket was to be launched on an M1419, which is probably the biggest AeroTech motor flown in Mexico. 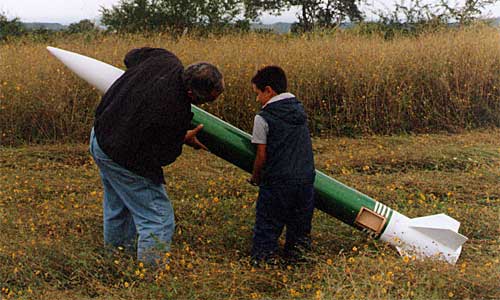 In the photo above (again by John Díaz), you can see Gustavo getting a little help with his Patriot. 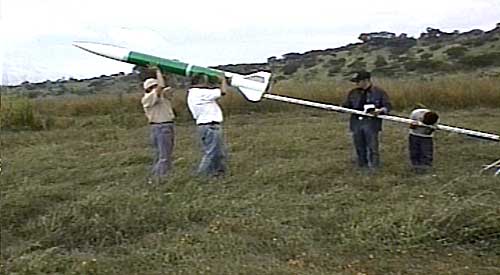 And in the photo above, you can see him getting a lot of help loading the Patriot onto the Quad-Pod. I didn't think the Quad-Pod could handle a rocket of this size, especially after my experiences, but it did a fine job.

In the photo above, the Patriot lifts off into a very dramatic sky. Gustavo and I were about 100 feet from the rocket and the sound of the M1419 is quite impressive at that distance! The rocket went into the clouds, which supposedly started at 8000 feet and we lost it. A minute or two later it was spotted coming down on its Rocketman parachute and we were able to see it come down, again into the canyon, but this time much farther along.

Gustavo started to go after it, but soon realized that it was much too far to walk to and was on the other side of a river. We decided to drive to the other side of the canyon and try from there. So, everything was packed up and we went to lunch.

After lunch, Gustavo checked with the local police to try and find out what village he'd seen in the distance where it looked like the rocket had come down. The police had gotten a report about the rocket from one little village across the canyon and thought maybe that's where it was. We drove out to the village with a policeman as a guide. It took us almost an hour to get out there over narrow and progressively less paved roads. 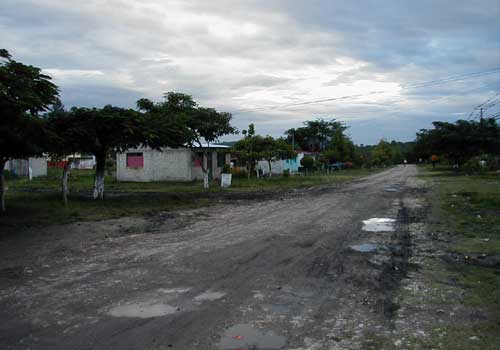 We finally ended up at a remote village. (You can see a view along the main street in the photo above.) The chief occupation of the people here seemed to be getting drunk and they'd all been successful by the time we arrived in the early evening. We had some very friendly locals invite us in for the local moonshine and one even offered us some corn. But, we found out that this wasn't the right place and didn't take them up on any of these offers.

With no more leads, we headed back to Xalapa. My father and I had to leave the next afternoon and Gustavo wanted to make one more try at recovering the rocket in the morning. We didn't spot the rocket and had to head back to Veracruz City to make our flight home. 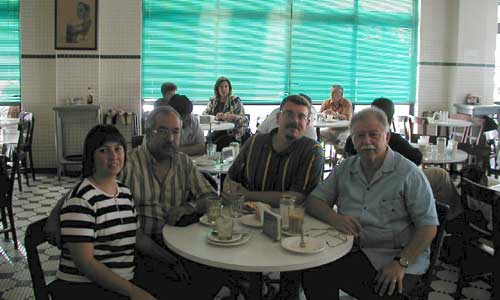 We did stop for lunch at the famous Cafe La Parroquia. In the picture above, you can see Gustavo's wife Yuriko, Gustavo, me and my father. Gustavo and his family made us feel very welcome and took great care of us. Thanks all!

The Patriot remained missing for two weeks, with Gustavo and friends making flights over the area looking for it. He'd just about given up hope when he took a last chance flight over the area in a helicopter and spotted it on Sunday, November 11. 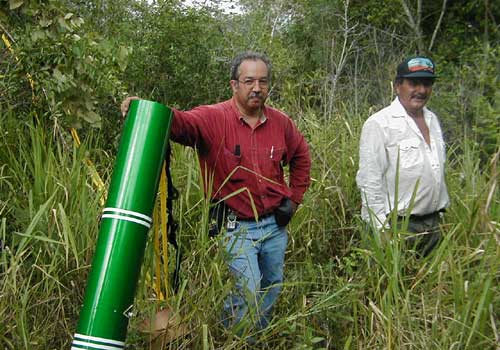 On November 12, Gustavo and his friend Ruben Salinas went down to the GPS location that Gustavo had marked from the helicopter in Ruben's Safari. They managed to get within three miles of the rocket and were able to carry it out through the jungle. In the picture above (by Ruben), you can see Gustavo holding up the rocket after recovery and below (by Gustavo), you can see Ruben working his way through the jungle.

Now that is dedicated rocket recovery! The Patriot is in perfect shape and ready to fly again.